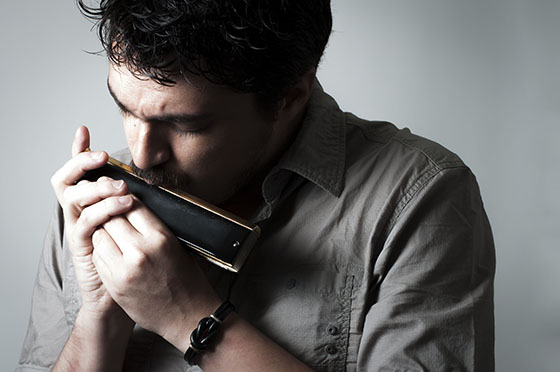 Luciani was born in Rosario (Santa Fe) in 1981 and is a very active composer and performer. When asked about the legitimacy of his instrument in the porteño environment, he loves telliing anyone who will listen that the the harmonica is equally at home playing tango, zamba or chacarera for a simple reason: the harmonica arrived in Argentina on the same mythical boat as the accordion and the bandoneon, so it can play everything.

It was the genius of harmonicist Hugo Diaz (1927-1977) that projected the pocket bandoneon into the spotlight where it could sing, laugh and roar.

In the 21st century, Franco Luciani is taking the harmonica's voice to new heights. The worldwide recognition of his talent is expressed by his election to the prestigious circle of Hohner Harmonica Masters where he is considered to be probably the best chromatic harmonica player today.

Luciani's current CD, "Anda en el aires" has been nominated for the Gardel Music Awards 2018 in Argentina. Our fingers are crossed for his success!

In addition to numerous recordings in his own name, he has also performed and recorded alongside many important artists such as Mercedes Sosa and Raul Carnota. Not to mention Gotan Project whose audience reaches well beyond Argentina.

With the generosity that characterizes Franco Luciani, his concert for Tangopostale 2018 will also be the opportunity for collaborations. There will be guest appearances from folklore dancers Giselle Gatica Lujan and Roque Castellano during the concert, but that’s not all. Franco Luciani also has and friends family in Toulouse and will be inviting some surprise guest musicians on stage for a very special musical and emotional moment.