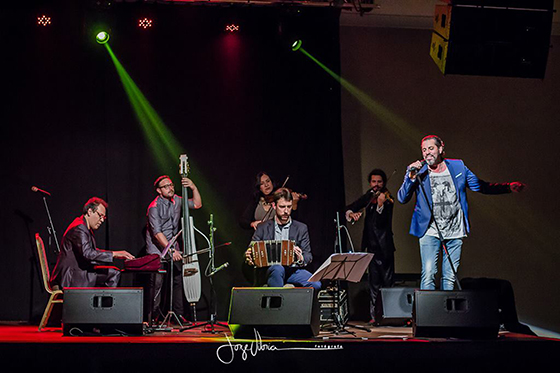 During Tangopostale, the grand balls take place at the salle des fêtes de Ramonville which dons a 380m2 room, a 215m2 outdoor dance floor under an awning, as well as a relaxing space (tango village with booths, massages, lawn chairs, bar and food trucks)

Experience the nocturna : come danse in complete darkness with phosphorescent bracelets. 20 minutes of magic await you!

NEW! For the comfort of the dancers, the alternative balls organized by OtrosTangos will this year take place from 11:30pm to 3am in the Marins d’eau douce room, right next to the salle des fêtes. Dancers will be able to go freely between all three dance floors!

From 3am onwards, an after party organized by OtrosTangos will enable you to continue dancing until dawn on the outdoor floor.

Following the unanimous success of their concert in 2014, Tangopostale chose to reinvite the Sexteto Milonguero to celebrate its 10-year anniversary!

Using his personal touch and a danceable repertoire borrowed from various types of orchestras (with a specific focus on those of the 1940’s), Javier Di Ciriaco created the Sexteto Milonguero in 2006. His goal – to keep the role of these great orchestras alive by staying in touch with the dancers, the milongas, the neighborhoods and the people… From the beginning of its formation, the group has always strived to offer danceable music.

Over time, and because of the variety of contexts in which they have performed, the Sexteto has included in its repertoire concert themes, Argentine folk music and international theme songs adapted to its own style, as well as their own compositions.

Over the last eleven years, the Sexteto Milonguero has traveled over practically all Argentina. They have gone on two tours in Latin America, completed 13 tours in Europe in over more than twenty-five countries, and gone twice to the Unites States where they playes in more than ten cities. They have also toured in Canada, Singapore and China.

In this latest production, double, and, first time, one of the cd’s contains compositions from group members.

• By car: exit n°19 (Ramonville) then follow the Parc technologique du Canal
• By bike: a short ride from Toulouse city centre along the Canal du Midi!
• By metro: line B, stop at Ramonville. We are setting up a regular shuttle between the venue and the metro at the beginning and end of the evening (last metro departure: Friday & Saturday = 3am / 12am on Sunday // first departure = 5.15am). And for departures after 3am, carsharing!